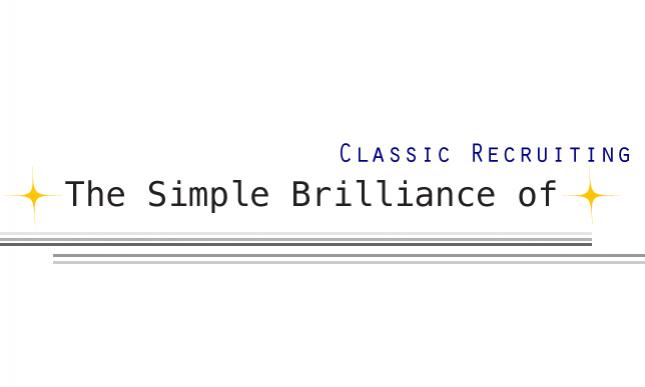 Ron Allen passed away Memorial Day, 2006. He was too young, but it was somewhat fitting since he was a military veteran and also a very memorable man.

I met Ron in the early 1990s when he was part of a team recruiting me to relocate from San Diego to Atlanta. I liked him immediately. He was very likeable. Ron Allen was a Salesman trapped in the body of an Accountant. Ron had been a CPA for some 30 years. He graduated from Georgia State University in downtown Atlanta and started his business life first with the large accounting firms and then as a Business Broker. Some time later, for 8 years, he was the CFO of a quickly expanding Atlanta Temp firm that grew from $8,000,000 to $165,000,000 during his tenure. In the 1991/1992 period, he moved over to a recruitment company where he had been on the Board of Advisors for the previous 7 years. I joined this firm as their trainer in 1993. This is when I had a chance to get to know this dynamo of a CFO.

When we had our regular recruiter class graduations, Ron would be invited in to give the new recruiters his parting words of wisdom before sending them off to their individual offices. I teasingly entitled these talks “By The Numbers” since he was the top financial person in the company even though he rarely spoke about the numbers. Instead he focused on giving them fatherly guidance—basic rules to live by as a recruiter. Let’s go back to those days and see how many I remember. Pretend you just graduated from rookie recruiter training. I get up in front of you and say, “Ladies and Gentlemen, let me introduce to you our CFO, Ron Allen…”

1. Don’t let anyone talk you into failing. Don’t be surprised if the top recruiter in your new office walks by your desk on your first day and tells you that you don’t need all of the recruitment tools that were given to you during your rookie training (daily planners, quick resource guides, scripts, etc.) to be successful. These top recruiters will boast that they don’t use those tools and don’t need them either. But don’t listen to them. Use the tools that you were given during your training classes to become successful. Then, after time, when the tools become a part of you and you reach the level that Abraham Maslow called “Unconsciously Competent” your use of those tools will not be as apparent because by then you will conduct your business naturally. But always keep those tools handy so that you can easily access them during inevitable slump periods.

2. This business is an activity business and it is not an easy business. This is a pretty straightforward business, but it is also hard work. Never confuse a lot of activity for production. A lot of one minute phone calls will lead you nowhere. The activity has to make sense, but there has to be activity nevertheless. You will never make a placement with a company that you never call.

3. This business is a Process, not a series of Transactions. It’s important to do everything everyday. When you conduct your business this way, you will always have something to do, something to work on. If you start treating this business as a transaction, then, once the transaction is over, you will have to start all over again. If that happens, this business will be rife with fits and starts and become a very confusing and difficult endeavor. So, treat your business as a process for smooth and constant production.

5. When you call in to your client companies, don’t talk to people who cannot say “yes”. In every company, everybody can say “no”, but few can say “yes”. So, make sure on your client calls that you reach the people, and speak with the people, who can say “yes”. If you only speak to those who can only say “no”, two bad things will happen. First of all, you will get nowhere. And second, no one will ever know that you called in, in the first place. The problem is, from an ego point of view, the people who can only say “no” don’t tell you that. They don’t say that they can’t say “yes”. They just say “no”.

6. We can’t be successful as a group unless each one of you are successful individually. So, that means learn the systems, pick up the phone, and do the activity. If you have questions, ask for help. Don’t muddle through when you are not sure what to do. Ask. Synergistically we can be more creative and bring more to the bottom-line than any one of us can accomplish singly.

The Best and Biggest Piece of Advice

And then came what I always considered his best piece of advice. He said that we are in an 80:20 business—that indeed life was an 80:20 proposition. So he would suggest to the new recruiters that they tell their Hiring Managers that if the candidate presented was 80% right for the position, jump all over him and consider yourself the luckiest HM on the face of the planet because no match will ever be a 100% match. And to the candidate he recommended saying that if the position you are interviewing for is 80% right, jump all over it because no position is ever going to be perfect. If it is 80% of what you are after, accept immediately and run to tell all of your family and friends just how lucky you have become. Remember, as in life, 100% matches—the so-called ‘perfect matches’—do not exist. If you look for them in your JOs and candidates, you will constantly be frustrated and if you look for them in life, your life will be a tortuous and unfulfilling journey.

Ron always had a quick wit and a wry smile. He called pick-ups “Pick‘em-up Trucks” and in elevators he would “mash” the buttons. Once in downtown Atlanta when we boarded an outside glass elevator to start our 73 story ride up the tallest hotel in the Western hemisphere, I mentioned that I didn’t like heights. In his quick way he said, “Well Bob, then look at the door”. He loved to play up his Southern drawl and ‘perceived’ slow Southern mannerisms to get the upper hand on those ‘damn Yankees’. He reveled in that. Ron was truly a Southern Gentleman. Like Julia Roberts, he was from Smyrna—a real “Smyr-fette”. Ron had two children who had unfortunately preceded him in death. I know that he was tortured by that. It was a shame. Professionally Ron had many gifts. He was a special man and touched many, many lives. You were special Ron Allen. I wish you God’s speed. May you finally rest in peace.